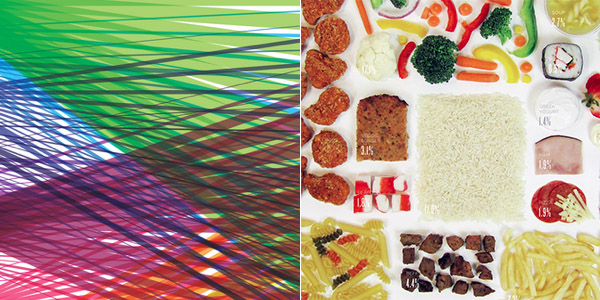 Beyond the visual appeal of this study from information aesthetics on “Personal Food Consumption Visualized in 40 Different Ways,” I am struck by its potential as a tool to encourage healthy eating.

A mobile app that enabled people to visually catalog their food choices just seems to offer such potential as a preemptive tool — building a mental image of different colors and balanced plates during the day would certainly appeal to me!

The delightful new Ngram Google Labs tool combines three of my favorite things: words, books and infographics. Here I’ve selected three terms — green biz, sustainable business and corporate social responsibility – to see which is the trending term in books over the past 50 years. Fascinating! (Who needs sudoku?) Check it out for your favorite words >> New Google Labs Ngram http://ow.ly/3r7KW

Windcuts [flickr.com] consists of various experiments that turn quantitative sensor data into visually compelling physical instantiations. Wind movement measurement data, such as wind direction, velocity and temperature, was used as the foundation to generate a 3D form, which was then physically drilled out of a piece of wood.

The direction of the physical line corresponds with the direction of the wind. The width and speed of movement reflects the wind speed. The temperature is mapped unto the height. The materials ‘surface plateau’ height represents zero degrees Celsius. So when the shape dips below the surface, it means the wind’s below zero degrees.

There’s something oddly compelling to me about the very idea of creating a 3D form, in wood no less, from data based on the seemingly ephemeral movement of air — also known as wind.

I see potential here for a wonderful educational tool. For those like myself, more comfortable with words than numbers in volume, these 3D forms bring to life otherwise fuzzy terms such as wind shear or turbulence. Makes me wonder if the climate change debate could have been shortened if displays like this were available for each physical effect discussed. Kudos to Information Graphics, and be sure to check out their other 3D representations.